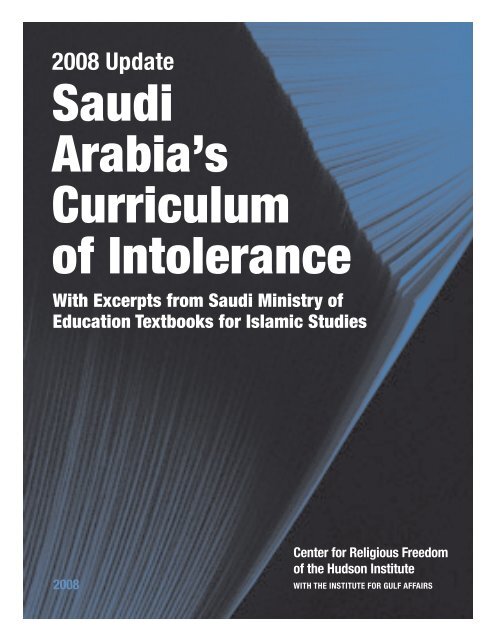 
Lessons remain that Jews and Christians are apes and swine, Jews conspire to "gain sole control over the world," the Christian Crusades never ended, the American universities of Cairo and Beirut are part of the continuing Crusades, the Protocols of the Elders of Zion are historical fact, and on Judgment Day "the rocks or the trees" will call out to Muslims to kill the Jews.

They teach that it is permissible for a Muslim to kill an "apostate," an "adulterer," and those practicing "major polytheism.

Saudi Arabia will replace the Wahhabi textbooks taught in schools

Other lessons demonize members of the Baha'i and Ahmadiyya groups. A lesson from a tenth grade text now posted on the Saudi Ministry's website sanctions the killing of homosexuals and discusses methods for doing so.

In the lessons examined in this report, the Saudi government discounts or ignores passages in the Qur'an to support tolerance. All of these textbooks have been reissued at least once and all but two of them reissued twice, yet overall the changes to the passages in question have been minimal, and the degree of substantive change has been negligible. Taken together, the report concludes, revisions in the currently-posted texts amount to moving around the furniture, not cleaning the house.

This analysis is issued as a deadline nears for the removal of intolerant teachings from all Saudi textbooks. This commitment stems from the Saudi government's "confirmation" of policies that resulted from extensive bilateral negotiations with the U.


Whether Saudi Arabia's "comprehensive revision of textbooks" will be achieved by the start of the September school year remains to be seen. As the report documents, thorough textbook reform has not yet occurred. Saudi King Abdullah is taking a leading role in interfaith dialogue initiatives, including convening a conference in Madrid later this week. In the following decades, those brave enough to criticize the government-mandated curriculum were scarce if not nonexistent. Suddenly, outsiders began asking questions and pointing fingers, wondering what exactly was being taught in our schools.

Anger," quoted inflammatory passages from a government textbook, such as, "The hour will not come until Muslims will fight the Jews, and Muslims will kill all the Jews. The pages of Saudi schoolbooks were finally submitted to a new, unfamiliar scrutiny — not just from outsiders but also from Saudis themselves. The Education Ministry responded to the criticism, appearing to commit itself to reform by relegating 2, teachers it deemed extremists to administrative roles far from the classroom. The ministry also instructed principals to report anyone preaching extremism.

Yet textbooks remained largely untouched, with only the most explicitly intolerant material removed.

Al-Qaeda’s biggest weakness is its propensity to kill indiscriminately

Now and then a journalist today picks up one of the government-issued schoolbooks only to find that extremism has sneaked back into Saudi schools. In the academic year, the new first-grade jurisprudence book yes, "Islamic jurisprudence" is taught in the first grade, along with a subject called "monotheism" condemned saying hello to non-Muslims. The lesson was presented as a dialogue between a teacher and a student named Ahmed. Ever since a royal decree that allowed Saudi girls to attend public schools, boys and girls have been required to use different textbooks. The move seemed progressive on the surface: The new subjects included human rights, Westernization, globalization, and international scholarships — but under these headings lay more propaganda. Westernization, for instance, was described in a mouthful as a policy "exerted by the dominant forces by tools such as the Security Council and the United Nations in order to implement Westernization strategies in poor countries, especially Islamic nations, under the slogans of reform, democracy, pluralism, liberalism, and human rights, particularly with regard to women and religious minorities.

That such anti-Western language made it into the hadiths proves how embedded Saudi ultraconservatives are in the Education Ministry — they were able to modify textbooks even against official national programs. The Education Ministry ultimately held its ground, revising the textbooks to exclude the intolerant subject matter. Still, teaching extremism is only one facet of a much larger, more persistent problem. National Center for Education Statistics, only Ghana and Qatar fared worse than Saudi Arabia in eighth-grade math scores across 48 countries.

A study published last year by religious scholar Abdulaziz al-Qasim found that Saudi religion textbooks "have focused far too much on the lowest educational and skill objectives, such as rote memorization and classification, and neglected entirely the objectives of analysis, problem-solving, and critical thinking," leading to "passiveness and negativity.

It has been more than a decade since the Education Ministry began working on a plan to address these problems. Known as the Comprehensive Curricula Development Project, it is expected to be implemented across the kingdom in the next year, according to its website. It calls for the books to require that "the learner grasp his membership and loyalty to Islam and derive all his affairs within it and renounce all that goes against it," as well as to "protect himself in facing deviant sects, creeds, false interpretations of sharia with reason, evidence, and politeness.

Somehow "time management," No. Saudis who were taught to believe a very narrow interpretation of Islam are now foisting it onto millions more students. Trending Now Sponsored Links by Taboola. Sign up for free access to 1 article per month and weekly email updates from expert policy analysts.